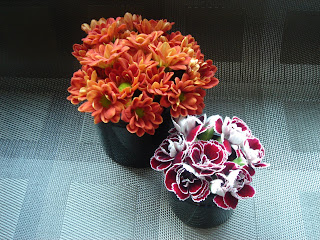 Happy Thanksgiving!! These are two mini vases of Chrysanthemums and Carnations I have arranged today. The vases look filled to the brim, but each one has only two stems of flowers. I have cut them really short to fill the 3" and 4" glass containers.

I have chosen 2 matching dark brown glass vases of different heights to complement the wintry hues of rust and velvety purple. The colors of the flowers have such a presence about them, I think this simple arrangement befits them most.

Although a wreath would be nice, I think this frugal arrangement also has its appeal. Happy thanksgiving!!
Posted by bonnie at 1:38 PM 1 comment: 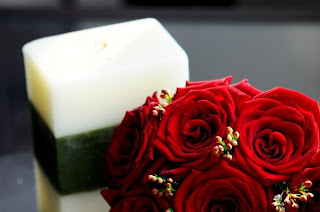 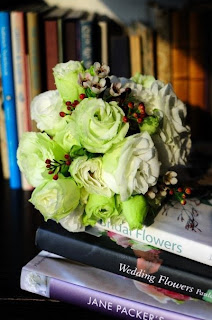 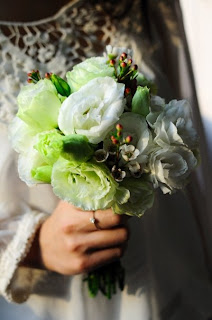 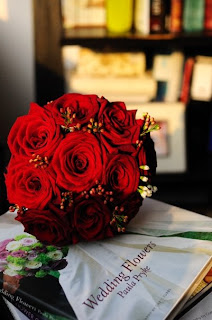 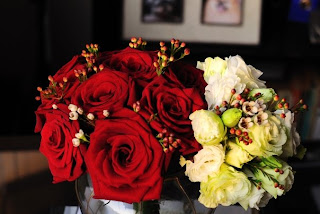 During the last week of October, we had a flower shoot done by Terry Bear. We were worried about the weather because the whole week had been cloudy and murky. We wanted the flowers shot under natural light and we were so thankful on the day of the shoot, the weather was fine and there was abundant lighting.

After a couple of test shots, Terry decided against the commercial style shooting, where the bouquets were upright and shot rigid as a statue. I was thrilled with the resulting photos. The lighting highlighted the layers and textures of the posies. The greatest part was the composition of the photos. They were artful, but at the same time Terry created a laid back, non structured ambience.

I hope in the coming days, more flowers and posies will be featured here.
(All Photos by Terry Bear, a very big thank you to YY)
Posted by bonnie at 4:30 PM No comments: