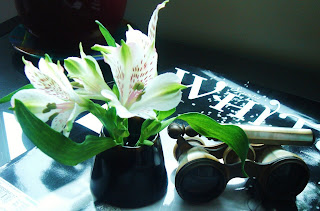 I got a stem of tiger lilies at the supermarket checkout yesterday. It was really a spur of the moment thing as I was already juggling a big bag of grocery, my handbag plus dry clean. It was one amazing feat to get the flower home. I piled everything on one arm in order to free my other hand to hold it. With stone on one arm and feather on the other, I waddled lopsidedly home.

I was so proud the flower was intact when I dropped everything on the dining table. I already had a visual picture of the lilies with its long stem standing in a tall vase. I went in search of the vase all the while thinking how elegant the lilies would look. Hugging the vase, I went back to the kitchen.

I tried to ease the stem out of the plastic wrapping but it would not budge. They did a real good job making sure the flower stayed in place with mounds of tape. After futile attempts to push the stem out, scissors were called in for the job. Just when I was cutting around the tape, lo and behold the stem broke!! I stood rooted in the kitchen like an idiot holding the lilies I had protected all the way home with the lower stem dangling in the plastic wrapping.

Aghast at what had happened I consoled myself at least I had half the length left. I put the broken stem on the kitchen counter in search of another vase but I guess the stem was just too fragile. When I took the flower out, the stem broke again with only one fifth of its original length left. The stem was so short by now I could only put it in the tiniest vase.

Talk about all the effort to get the lilies home. It is a lesson well learnt, impulse buying is never a good idea.

Here is a shot of the tiger lilies with a treasured antique opera glass.
Posted by bonnie at 5:53 PM