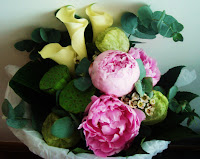 I have been receiving flowers from a friend without fail on Valentine's Day and my birthday for six years. This year's belated because my friend was out of town. The nicest part was that even though it's belated, my birthday was not forgotten. Thanks for the thought.

I bought the vase at a bazaar near my place last year. It was such a bargain I also bought a porcelain umbrella stand. I mainly use this vase for heavy bouquets, since it's pretty heavy itself; big flowers would not tumble out of the vase so easily. The vase was perfect for the peonies pictured here since the blossoms were bigger than rice bowls!!
Posted by bonnie at 5:50 PM

I love your bouquet and happy belated birthday once again!! May there be lots of happiness!